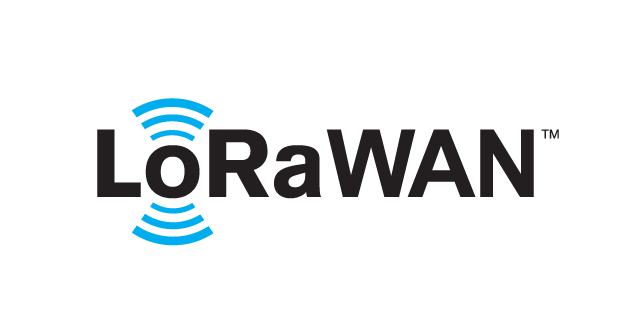 If you are into connected devices, you may have heard of LoRaWAN more than once by now. It is a long range radio frequency protocol that allows things to connect to the internet over a long range with low power consumption. This has solved a big problem in the Internet of Things ecosystem presently. With long battery life of up to 5 years combined with reduced maintenance cost of the sensor network, LoRaWAN is bringing forward all kinds of new use-cases.

In a nutshell this is what LoRaWAN brings and in this article we will look into the architecture, key characteristics of the core technology and the new emerging use-cases where it is being used.

The LoRaWan Standard and LoRa Alliance

The beauty of this technology is that it is based on an open standard. It uses the unlicensed spectrum as part of the ISM (Industrial, Scientific and Medical) radio band. Across the Europe, LoRaWAN uses 868Mhz plan, whereas in the US it is 915Mhz plan. Using the unlicensed spectrum makes it easy for anyone to setup their own network and make use of it. Many telecom operators have started to embrace LoRaWAN as a technology and are providing connectivity along with service in many countries around the world. KPN, Orange, SK Telecom, Comcast and many others are actively involved with rolling out large scale deployments in their area. This makes LoRaWAN as a technology even more interesting, as it is compatible with networks deployed by different operators from small to the large scale.

LoRaWAN standard is governed by LoRa Alliance - a group of over 500 members that all support the protocol and make components, products and services related to LoRaWAN. Companies like Microchip, ST, Cisco, Softbank and ARM are members. More information here .

The LoRa Alliance is an open, non-profit association of members that believes the internet of things era is now. It was initiated by industry leaders with a mission to standardize Low Power Wide Area Networks (LPWAN) being deployed around the world to enable Internet of Things (IoT), machine-to-machine (M2M), and smart city, and industrial applications. The Alliance members will collaborate to drive the global success of the LoRa protocol (LoRaWAN), by sharing knowledge and experience to guarantee interoperability between operators in one open global standard. 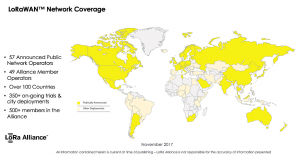 LoRa® is the physical layer or the wireless modulation utilized to create the long range communication link. LoRa® is patented by Semtech, based on chirp spread spectrum modulation, which maintains the same low power characteristics as FSK modulation but significantly increases the communication range.

Let’s start with defining LoRa - what it is and how it differs from LoRaWAN. LoRa is a wireless technology just like the more commonly used WiFi, Bluetooth, LTE and Zigbee. One technology cannot solve everything and in many cases there are trade-offs that one has to accept . LoRa fulfils the need for low-cost, battery-powered devices that need to send data over a long distance. However, for sending data with high bandwidth, LoRa is not a suitable option. LoRa is the technology that modulates the data you want to send, into electromagnetic waves. This modulation technology of LoRa, called the Chirp Spread Spectrum, has been used in military and space communication for decades already. This is due to the long communication distance that can be achieved and the robustness to interference.

LoRaWAN on the other hand is the MAC protocol for high capacity, long range, low power, Internet of Things network of LoRa nodes. It takes advantage of the LoRa features described above and optimizes battery life and quality of service for the LoRa nodes. The protocol is fully bi-directional, which allows for reliable message delivery (confirmations). It includes definition of end-to-end encryption for security and data privacy, over-the-air registration of end nodes, and multicast capability. The standard ensures interoperability of the various LoRaWAN networks world-wide. 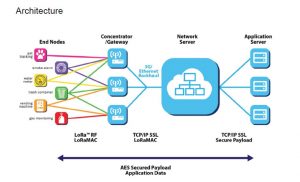 End Nodes are physical hardware devices that contain sensing capabilities, some computing power and a radio module for translating the data into a radio signal. These end devices can send data to the gateway and receive data as well. They can achieve multiple years of lifespan on a small-size battery if they are put in a deep sleep mode to optimize energy consumption.

When an end device sends a message to the gateway, it is referred to as ‘Uplink’ and when it receives a message back from the gateway it is called a ‘Downlink’. Based on this, there are three different ways of differentiating the end devices:

Class A devices take up the least energy as compared to the other two classes. On the downside, these can receive a downlink only after sending an uplink message. Class A devices are suitable for sending data on a time-based interval (for example every 15 minutes) or for devices that send data event-driven (when the temperature gets above 21 degrees or below 19 degrees).

End nodes using Class B allow for more downlink message slots than for Class A. This reduces the latency for the messages but at the same time make it less energy efficient.

Lastly, Class C have continuous receive windows that are only closed when the device is sending an uplink message. Due to this, it is the least energy efficient and in most of the cases needs a constant power source to operate.

Gateways are also known as modems or an access points. A gateway is also a hardware device that picks up all LoRaWAN messages from the End Nodes. These messages are then converted to an array of bits that can be sent via the traditional IP networks. The gateway is connected to the network server to which it transmits all the messages.

Gateways are transparent with limited computational power, all complexity and intelligence is executed in the Network Server. Based on the usage and type, gateways come in two types:

All the messages from the gateways are forwarded to the Network Server. This is where the more complicated processes of data handling take place. It is mainly responsible for:

An end device can send data to the gateway and receive it according to the configuration. This configuration can be called from the application too.

An interesting feature of LoRaWAN is localization without the need of GPS. This is especially useful for tracking assets and sensors as it is battery efficient and is less expensive to maintain than the traditional methods.

LoRaWAN is designed for large scale IoT deployments where thousands of devices can be connected to a modest number of gateways. These gateways can listen to several channels and process multiple messages at the same time.

Another key characteristic of LoRaWAN, is the speed in which data can be sent. There are different data rates that can be used for transmitting data, these data rates are referred to as: Spreading Factors (or SF). Slower transmissions allow for longer and more reliable range.

As an example, think about trying to have a conversation with someone who’s standing very close to you. You can speak quite fast and the other person is still able to hear everything you say. When you try to have a conversation with someone that’s standing far away, you have to speak much slower to make yourself understood. This principle is embedded in the LoRaWAN protocol.

A key feature of LoRaWAN is that the network can automatically optimize the speed in which the device sends its data. This functionality is called Adaptive Data Rate (or ADR) and is essential for increasing the capacity of a LoRaWAN network. ADR allows us to easily scale the network, simply by adding an extra gateway. Due to this additional gateway now, many end devices will automatically change their Spreading Factor, resulting in less time on air per device which adds more capacity to the network.

Adaptive Data Rate (abbreviated as ADR) is a very simple mechanism that changes the data rate based on simple rules:

Both keys are 128 bit AES encrypted, in ECB mode.

LoRaWAN has found its own unique place in the market when it comes to the different use - cases and applications that can be built using the technology. With its distinctive characteristics, LoRaWAN is best applied in scenarios where: 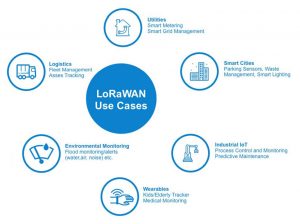 Start working with us today!